This often misunderstood breed has also been known as America's Sweetheart

October is National Pitbull Awareness Month, and therefore the perfect time to highlight Pitbulls, their history, and the traits that make them wonderful companion pets.

History of the Pitbull

Though these dogs were initially bred for the purpose of fighting for the public’s recreational entertainment and gambling during the 19th Century in the United Kingdom, other Pitbulls were bred specifically for work and companionship. Pitbulls previously bred to fight other animals were not prone to be aggressive toward people, since any aggression toward people was not tolerated in the dog who needed to be routinely handled by people. Pitbulls always made excellent companions for humans. The Irish version of the Pitbull was known as the “Old Family Dog.”

When immigrants from the British Isles came to the United States just before the Civil War, their beloved Pitbulls came with them. The Pit Bull Terrier breed was named the American Pit Bull Terrier. Despite the original intent for which they were bred, the American Pit Bull Terrier proved to be an invaluable and large fixture in early America. As dogs new to the frontier, Pitbulls served many roles, including herding cattle and sheep, serving as livestock guardians, and protecting their beloved families from thieves and wild animals. The dogs also helped their owners hunt and catch hogs. Through their loyal and loving interactions with adults and children in the family, Pitbulls earned an important place in history as both a companion and working dog.

Pitbulls were seen as working class companions during the first half of the American century. Americans admired the dogs for the same qualities that Americans took pride in of themselves; friendly, brave, hardworking, and worthy of respect. The Pitbull became an All-American dog, being used as a mascot during WWI and WWII. A Pitbull known as Sergeant Stubby , has been referred to as the most decorated war dog of WWI, serving 18 months on the front lines in 17 battles. It is reported that Sergeant Stubby survived being wounded twice in combat and also captured a German spy, saving his entire platoon from a poison gas attack.

Other notable Pitbulls include Petey, a character from the series The Little Rascals, who had a defining ring around his eye. Famous dog trainer Cesar Millan’s right-hand dog named Daddy was a staple of Millan’s training with poorly mannered dogs due to Daddy’s mellow temperament and ability to interact calmly with no-so-calm dogs. Pitbulls have often been used in commercials and company logos. The Pitbull is known to be a companion to Helen Keller, Theordore Roosevelt, Thomas Edison, Mark Twain, Fred Astair, and Humphrey Bogart, to name a few.

“It is likely that that the vast majority of pit bull type dogs in our communities today are the result of random breeding—two dogs being mated without regard to the behavioral traits being passed on to their offspring. The result of random breeding is a population of dogs with a wide range of behavioral predispositions. For this reason it is important to evaluate and treat each dog, no matter its breed, as an individual. All dogs, including Pitbbulls, are individuals. Treating them as such, providing them with the care, training and supervision they require, and judging them by their actions and not by their DNA or their physical appearance is the best way to ensure that dogs and people can continue to share safe and happy lives together.”

In the United States, the term Pitbull is often used to describe a number of breeds in a group that includes the American Put Bull Terrier, American Staffordshire Terrier, American Bully, Staffordshire Bull Terrier, and sometimes the American Bulldog, as well as any crossbred dog having similar physical characteristics to these breeds. These dogs have great physical and mental strengths that make them great partners for responsible owners.

Strong, energetic, determined, resourceful and driven can all describe a Pitbull. They can be extremely affectionate, thriving on positive human interaction. Pitbulls will require an owner who can maintain adequate control of the dog, since when the dog sets its mind on a goal, he will usually try to achieve it- whether it is climbing a fence or escaping the yard to take a jaunt around the neighborhood, or insisting on being a lap dog and bestowing kisses upon its owner, a Pitbull will not give up easily! Pitbulls, like many other breeds, have a high prey drive. Pitbulls can excel at obedience, agility, work as therapy dogs, K9 police dogs, and be excellent family pets.

The American Temperament Test Society, Inc (ATTS) was created to set a uniform standard for testing different breeds of dogs. Unique breeds that are commonly included in the Pitbull category achieve excellent temperament scores, scoring in the top 30 of 130 breeds tested, or the top 23% of all breeds. The average temperament score for the 130 breeds tested is 82.7%, while Pitbull type dogs score an average of 87.9% in ATTS test results.

These fun-loving dogs are always up for a game, and should be obedience trained by their owners because a well trained dog is a happy dog! Training offers a good bonding experience with your dog, and Pitbulls are intelligent and eager to please their owners- a winning situation for both the dog and the owner! 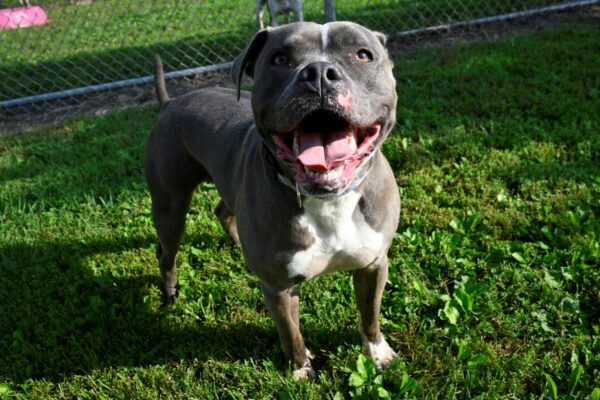 Liberty is a smiling example of the many wonderful Pitbulls awaiting a forever home at the shelter.

Interested in Adopting a Pitbull? Check out our wonderful adoptable Pitbull/Pitbull mixes and fill out an application!