A Home Full of Rescues 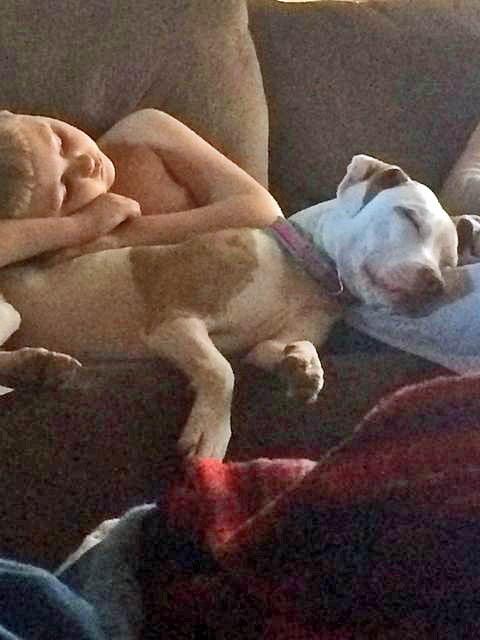 Zach and Marissa were dog lovers well before they first adopted from MCAC.

Jojo (previously Daisy Mae) was adopted at just 8 weeks old during the fall of 2018, being scooped up off the adoption floor rather quickly. She went home and was living a great life, growing up with an older sister.

When word got out the shelter was going to be closing for walk-ins and needed fosters last spring, they took a look at who was there and found Cali. Cali had recently been hit by a car and was having problems with her hind end. This sort of situation was familiar to them. They recently lost their beloved pooch after medical complications arose after she was hit by a semi. They saw Cali and knew she needed to go home with them. Not even 2 months into her foster stay, her adoption was finalized and their house had a second rescue. Cali and Jojo were best buds.

As the owners stated, "What's one more when you already have two?"

Ralphie came to the shelter as a stray pup in December and quickly gained a lot of attention for his squishy cheeks and puppy-dog gaze. Zach and Marissa saw Ralph online and knew they wanted to meet him. How could you resist that face!?

It took a little bit of an adjustment period for the two girls to get used to Ralph, as he is a rambunctious, in your face puppy, and Jojo has more...cat like behavior, as their owner put it. Cai isn't one to play rough, like Ralph would like, since her hips can get a little sore from the accident, but her parents baby her like she deserves.

Just a few short months after adoption, Ralph has grown into a big boy and looks like he will keep going for a while!

All 3 pups get along great, and love their human siblings! They are living a country life, out in the open, with lots of fresh air and room to roam. They even have some chicken and quail siblings!

Rescues make a house a home. Thank you Zach and Marissa for adopting!