There's just something about pit bulls that makes a house a home! 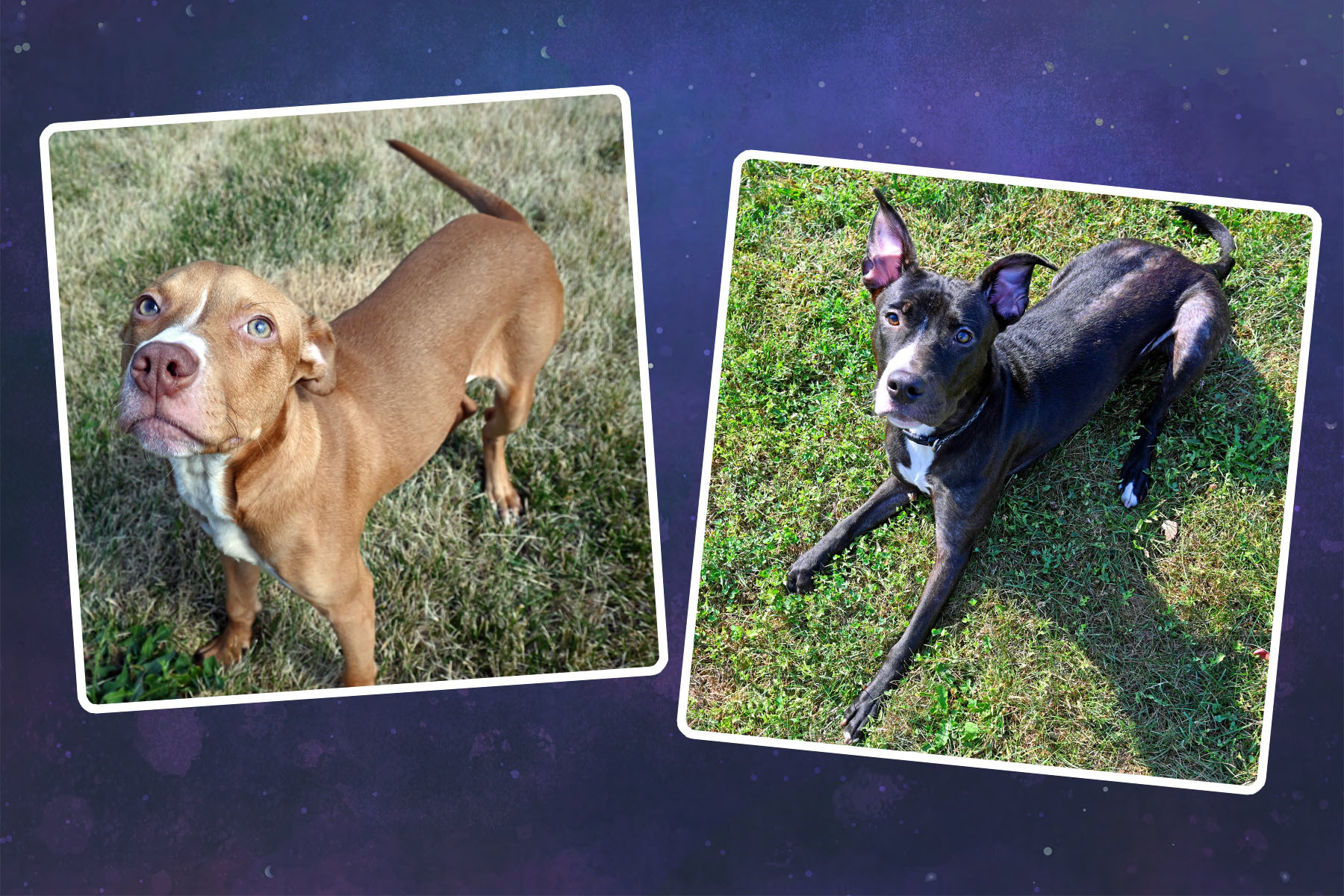 Being Pit Bull Awareness Month we figured there was no better time to share the story of this very special woman and her new family.

Hazel (formerly known as Sadie) was confiscated and brought to MCAC in the middle of June to wait and see if her owners would be able to reclaim her. They never did so she was moved onto the adoption floor to find a more suitable home. The shelter sees a lot of pit bull type dogs, so it isn't anything new when they sit for weeks and weeks before adoption. Sadie was a cute, playful girl, but we all figured she would be here for a little while as her back legs were a little...misshapen. Something special happened and she was on the adoption floor just 4 short days before someone came in to meet her and knew she was the one! She was adopted and went home to live a wonderful life.

Lacey (formerly known as Macie) was surrendered to the shelter at the very end of August due to no fault of her own. She was pretty nervous at first, which is understandable, young pup, new environment, lots of loud noises. We noticed she opened up a bit any time she went outside and saw other dogs playing, so we tried to do this regularly to bring her out of her shell she created. Being a black mixed breed labeled as a pit, seeing it all the time, we knew unless the right person came along she would be here a while.

DMCASF and MCAC were contacted by Erin, Hazel's new mom, wondering about other dogs on the adoption floor. Knowing it was a wonderful home, we were excited for her to come back and visit to find another fit for their home. She visited with a couple pitties on the floor but they just didn't click. I told her about Lorelei, a Border Collie mix on the floor and she has the BEST response, the most perfect thing that could have been said. "I know she will be adopted quickly, anyone would adopt her. I would like to adopt a pit, someone other's won't want because they don't like the label. I love pits and that is what I want in my home." I could have cried!

Erin went home without a new playmate for Hazel, but not even a week later contacted the shelter again about a couple pups on the adoption floor. She brought Hazel in to meet Lacey and there were fireworks! They met outside for the typical co-walk, occasional sniff and first impressions and it went great! But Erin wanted to see how they were off leash, hanging on their own. The shelter manager took them to a pen out back and they were back there for some time. We were on the edge of our seats up front, hoping Erin and Hazel had found the right fit. Staff came back in nothing but smiles and the manager said "That was the best meet and greet I've had in my entire career here!"

The girls were playing in the lobby while Erin filled out her adoption paperwork, ready to take Lacey home to her new life. I had never seen those two girls look as happy as they did in the lobby together that day.

We got a message with this adorable picture attached - "Lacey and Hazel are the best of friends and have had an awesome weekend getting adjusted with one another. They play hard yet they love to lounge around and sleep together. The pic attached is on the car ride home and they were SO excited!"

How can you not smile looking at that picture!

Many people have a negative disposition towards pit bulls, which we here at the shelter know is quite unfounded. There are 15 different breeds of dogs that can be mixed together to make the "pit bull TYPE' of dog. The term pit bull is essentially used as "mixed breed" these days. When a stray is picked up they are almost always labeled as a pit. MCAC is working hard at ending this and the negative history attached to the label. When someone comes in looking to adopt a dog others will look right past, it catches our attention and leaves a lasting impression.

I messaged Erin and asked if we could do a success story on her family for Pit Bull Awareness Month and this is what she had to say.

"This past summer after my beloved pittie passed away, I knew we would want another dog soon. I began my search at local shelters and came across this adorable puppy named Sadie. We went for a visit at the Decatur & Macon County Animal Shelter and I left with her. Her name has since changed to Hazel. Hazel is a very loving, sweet dog but she’s very timid, shy and scared of noises. Her tail was always tucked under but we soon noticed that when she saw other dogs, her tail would wag and she would look excited. I knew then I had to get a 2nd doggie for our home as I’ve always wanted to have two dogs and I felt another addition would just help Hazel.

We made another visit to the Decatur & Macon County Animal Shelter a few months later to visit a doggie named Lacie. And of course Hazel came along to meet her. It was almost immediate that the two were sniffing, licking and wanting to play with one another. I couldn’t leave without Lacie as I knew her and Hazel were already the best of friends!

We were home not even 24 hours and they were busy playing, running around in the yard and then sleeping by each other for naps. It’s like they’ve known each other since birth.

I’m very happy and I think it’s safe to say both Hazel & Lacey are on cloud 9 in their home together."

We couldn't be happier for these two MCAC alums. Thank you so much for adopting and giving pit bulls a chance!